Shahid’s 11 Vs Sari Odioum B

In the ongoing HPL 1.2 Shahid’s 11 thrashed Sari Odioum B by 6 wickets. Earlier toss was won by Sari Odioum B.

And they decided to bat first and struggled from the very beginning in their innings, kept losing wickets from the start at one stage they were 35 for 7 but basit kohli’s quick fired 48 got them a score of 82 in their alloted 10 overs. 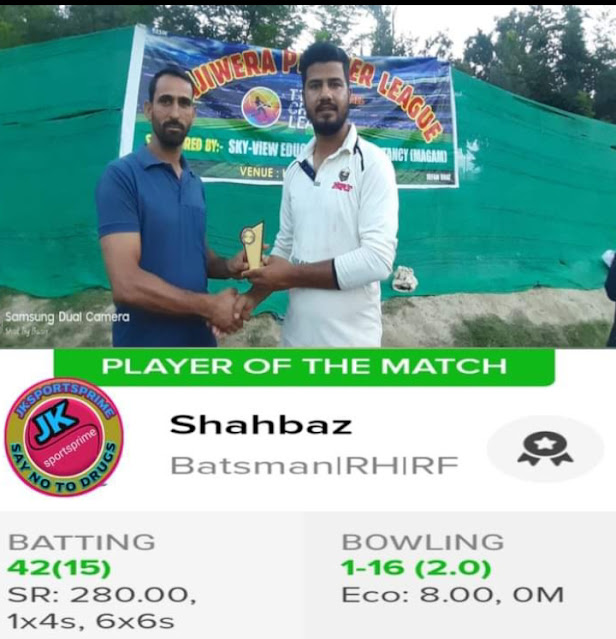 Shahid’s 11 bowlers were on top from the very start. Mansoor the left arm lanky took the season’s first hat trick so far , and other bowlers also helped the team to restrict Sari Odioum B to the tournament’s lowest score of 82.

Chasing the target of 83 Shahid’s 11 team looked in control their openers provided a solid start to the team. Ishfaq malla and other lefty looked in total command.

In the meanwhile both the openers fell cheaply after a blistering start. It was the number three tanveer who ensured his team over the line by 6 wickets with 13 balls to spare.

Mansoor Ahmad for his brilliant spell of bowling was adjudged player of the match.
With this our second round concludes are over Top Eight are.
1.NCC REDS, 2.YOUNG 11 HANJIWERA, 3.MEDIA WARRIORS, 4.ONE AND ONLY, 5.SHAHID’S 11, 6.AHMEDPORA 11, 7.ROYAL STRIKERS, 8.PATTAN STARS