Earlier toss was won by Ncc Reds captain without any doubt decided to bat first against mighty Ahmedpora 11 team.

Mudasir and muzaffar took the attack to the opposition with their blistering hitting, meanwhile mudasir lost his wicket after a fiery 35 in the other end muzaffar kept his momentum going joined by Imran who looked set from the dressing room punished Ahmedpora 11 bowlers to all parts of the ground scored match winning 81.

With the help of the solid top order NCC Reds posted a humongous score of 173 in the alloted 10 overs in high volatge affair. 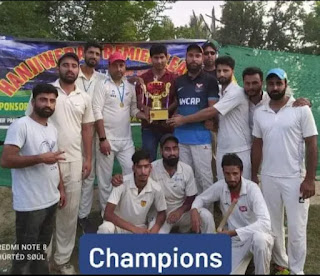 Chasing the target of 174 team Ahmedpora struggled to find any rhythm going forward, their opening pair never got settle and looked in all sorts of trouble.

After the departure of Ishtiyaq Ahmed, Nasir Ahmed gave his team a ray of hope with his fiery knock of 55 but his knock goes in vain as they suffered a loss by 16 runs in the main event. Imran Ahmed for his brilliant match winning knock was declared player of the match.

Mudasir Ahmad scored 310 runs and took 11 wickets was declared player of tge the season. Future star Aqib dar got the Emerging player of the season award.

HPL family congratulates team NCC Reds for their emphatic victory over Ahmedpora 11 . HPL family would also like to thank the managing body for their wonderful job.