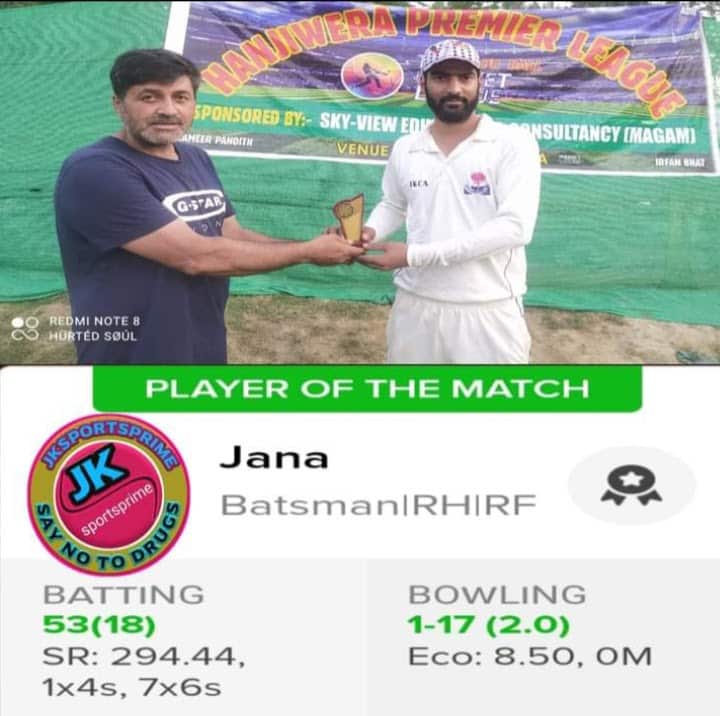 HPL QUARTER FINAL NO.1 AND NO.2 SUMMARY.

In the ongoing Hanjiwera premier league. The match was played between pattan Stars and Shahid’s 11. Earlier toss was won by pattan Stars and they elected to field first, meanwhile Shahid’s 11 batted first and posted a moderate total of 102 the on board in the alloted 10 overs.

Shahid’s 11 without Ishfaq malla struggled early in the start. But later tanveer played a special knock 38 got them a total of 102.

Chasing the target of 103 pattan stars got of to a perfect start provided by the two openers jana and danish but later pattan stars lost momentum in the middle part of their innings kept losing wickets and suffered a loss by a close margin of just 11 runs. With this win Shahid’s 11 was first team to reach in the semifinals.

Tanveer Ahmad for his brilliant performance was adjudged player of the match.

2 Young 11 Hanjiwera never got any momentum throughout their innings kept losing wickets for fun. Young 11 Hanjiwera team looked down and out from game from the very beginning of the match and suffered a huge defeat of 130 runs .

With this win Ahmedpora 11 became the second team to qualify for the semifinals.

Ishtiyaq Ahmed for his amazing century was adjudged player of the match .