Amir’s brilliance with the bat and the magic of umar with the ball helped Hanjiwera cricket club lift kongamdara super league. 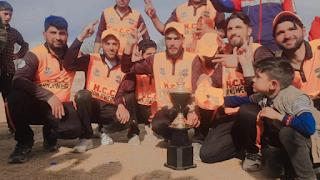 In the ongoing Kongamdara super league HCC defeated might Aboora by 70 runs. Earlier toss was by the captain of HCC Muzammil mir , without any hesitation choosed to bat first in the main event.

Meanwhile HCC struggled in the early of their inning scored just 50 in first overs for the loss three wickets.

Amir’s superlative knock of 80 with in just 35 balls helped HCC to put a competitive score of 180 on the board.

Meanwhile showkat lone also played some wonderful shots and fell just short of a half century.

Chasing the target of 181 Saarc Aboora got off to a flier provided by the opening pair, smashed new ball bowlers all round the park.

Meanwhile captain Muzammil took the responsibility on his shoulders and took the all important wicket of the destructive sameer tiger with a peach of a slower ball. 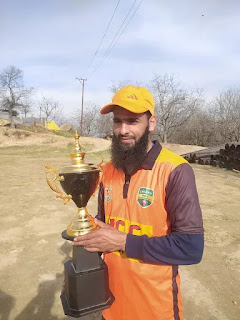 From their on Aboora struggled to find any momentum in their innings. And came the magic of umar wani’s mystery, Saarc Aboora team look clueless against his off spinners and he chipped away with 4 wickets and helped his team to lift the all important trophy.

In the end HCC Hanjiwera clinched the victory by a huge margin of 70 runs.