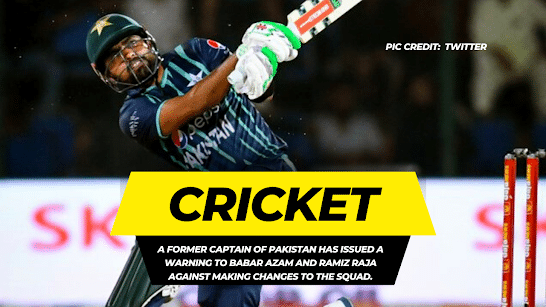 A former captain of Pakistan has issued a warning to Babar Azam and Ramiz Raja against making changes to the squad.

Srinagar: Younis Khan, a former great cricketer for Pakistan, has issued a warning to the current captain of the Pakistan cricket team, Babar Azam, and the chairmain of the Pakistan Cricket Board, Ramiz Raja, to refrain from making any changes to the squad in the last moments before the T20 World Cup.

There has been a significant amount of pressure from both previous players and the general public over certain players and their performance in the side.

Younis Khan, a legend in Pakistan, issued a warning to PCB president Ramiz Raja and Babar Azam and company as he was competing in a tape-ball tournament in Karachi.

“Every time I turn around, I hear someone complaining that the squad needs some personnel adjustments. The time before, we attempted to do this. Now, I believe that they should not disgrace themselves by making a rash decision to switch the team, and I will explain why. These guys must be used by our coaches, captain, and PCB in some capacity. According to a comment attributed to Younis Khan, “This is the only group of players you have, there won’t be any coming in from anyplace else, and this group is the greatest lot.”

Younis also gave the players the advice to adjust their strategy based on the circumstances of the game they were playing.

“Cricket is a game of sacrifices (…) there is no such thing that I shall only play in this way when I play for the national side. There is no such thing as a ‘playing style’ in cricket. You need to modify your approach for the sake of your nation and for the millions of people who are watching you, and when this is the way you believe, I don’t think there is anything that can stop Pakistan”, he told them.