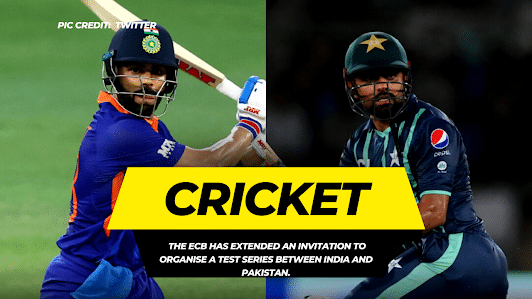 The ECB has extended an invitation to organise a test series between India and Pakistan.

Srinagar: The England and Wales Cricket Board (ECB) has proposed that they would play host to a future test series between India and Pakistan in order to make this matchup feasible and satisfy the desires of cricket fans.

However, the PCB has turned down the offer since they want to focus on bringing international teams to Pakistan.

According to the article, “it is known that the PCB are not keen on playing India at the time at a neutral location but are appreciative for the ECB’s offer,” which demonstrates the strengthening of the connection between the two boards.

After an absence of ten years, Pakistan has only just lately been successful in convincing teams to travel their own nation. In their opinion, playing India in England would be a step backwards, but they may alter their minds if it ends up being the only feasible option to make the matches happen and bring in important revenue for Pakistan cricket,” the report said.

As a result of the difficult ties between the two nations, a test match has not been played between them since 2007.