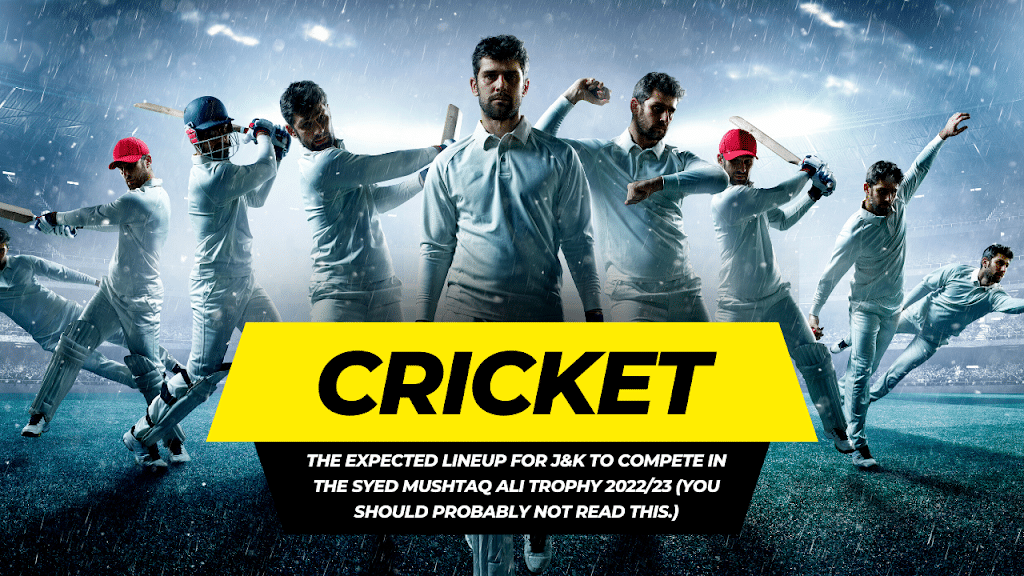 The Expected Lineup for J&K to Compete in the Syed Mushtaq Ali Trophy 2022/23 (You should probably not read this.)

It’s that time of the year when I put on the selector’s hat, but only the hat doesn’t always fit well enough or those with the actual hat on don’t totally agree with me (of course for obvious reasons)!

Then let’s not waste any more of your time with my jokes that aren’t very funny and get right down to business: The Jammu and Kashmir Cricket Association (JKCA), assuming it all stands for what it implies, is nearly set to unveil the team that will compete in the next Syed Mushtaq Ali Trophy, which is India’s most important Twenty20 competition.

Although the criteria that the selectors used to invite players to the selection camp are as opaque as Sunil Narine’s bowling action used to be, it is not difficult to speculate on who would be included in the team. The only catch is that you have to choose 15 people from a pool of 17, despite the fact that there are 39 players present at the camp.

If what you read in the previous sentence left you feeling bewildered, let me to clarify it for you as best I can: from what we have been told, among these 39 players, there are not a lot of choices that could move on to reach the main team, and the reasons for this are not very clear either.

Anyway, let’s get started with the forecasting, shall we? But is there anything that can be predicted? Henan Malik, Abdul Samad, Qamran Iqbal, Shubham Khajuria, Shubham Pundir, Auqib Nabi, Parvez Rasool, Abid Mushtaq, and Yudhvir Singh and Rohit Sharma are the ten players that will be selected without further consideration among the 15.

Don’t get me wrong! I, in no way, imply that they all deserve to be part of the team. Some of them aren’t even close to being strong Twenty20 players, while others have dreadful, terrible stats in the Twenty20 format. But regardless of the circumstances, each and every one of them would very certainly be selected for the team.

There are now just five places available! Who should we go with? I would have liked to have a panel of three or four individuals to debate, but who would be interested in trying to forecast J&K’s team when we all know that in the end, they will choose anyone they want regardless of form, numbers, talents, etc.?

Permit me to venture a guess: Nasir Lone is the first name among the five. Reason? His performance in both the One-Day and the Multi-Day finals was above and above expectations! It ought to be a simple guess, but given that it’s JKCA, I’m still going to go with that one!

From the remaining four, I would choose Sharukh Dar and Mujtaba Yousuf, both of whom are quick bowlers. In both one-day and multi-day tournaments, Sharukh has distinguished himself as the best among the pacers. He has been successful at picking wickets at consistent intervals. He ought to be there, but would he really be there? I won’t provide any assurances for the same reason as before: it’s JKCA!

The J&K team could really need some variation, and left-arm seamer Mujtaba Yousuf is just the player to provide it. If the circumstances are even somewhat favourable, he may swing the ball early and make the most of the situation. However, I cannot say for certain that JKCA will accompany him!

You must believe that this man is unsure about everything, don’t you? Who are the possible candidates when JKCA is selecting the team? Not even the captain, I can tell you of that!

TWO MORE TO GO? The other would be a wicketkeeper, and if you ask me, it has to be Suryansh Raina. If you ask anybody else, it has to be him. He has access to all of the options and can go ballistic from the very first play. In order to play well in the competition, J&K will need an aggressive starter at the top of the lineup.

It is difficult to choose only one player to continue. Taking into consideration the 14 points listed above, we need to have a spinner or a batter. My pick would be Jatin Wadhwan, who has performed really well for J&K in this format in the past. But as of late, nobody pays any attention to him.

The most important issue that has to be answered is, “Who will be the CAPTAIN?” In the event that it were up to me to choose, I would choose Henan Malik. Why? He has a level head and is a top-tier hitter who consistently gets on base. At the Under-25 level, he has shown his leadership abilities, and the thing that stands out the most about him is that he understands how to keep a team together.

Therefore, in the team that I anticipate, I will have him serve as the captain, and Abdul Samad will continue to hold the position of deputy captain.

So, let’s take a look at what the expected lineup looks like:

What are your thoughts? What kind of ball is it, a leg-break or a googly? In any event, the batter would be removed, which is the only thing that really counts!