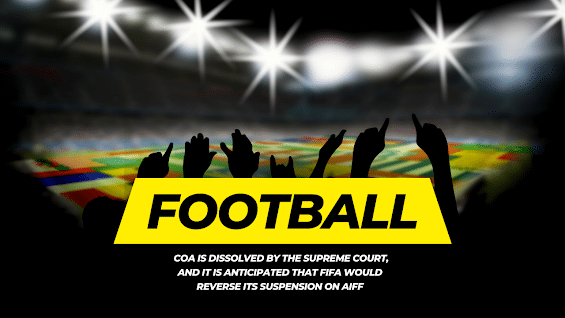 CoA is dissolved by the Supreme Court, and it is anticipated that FIFA would reverse its suspension on AIFF

Srinagar: As a prompt response to the suspension that was imposed by the governing body of world football, FIFA, on the All India Football Federation (AIFF), the Supreme Court of India on Monday issued an order that the Committee of Administrators be dissolved (CoA)

The ruling was handed out after recommendations from the Central Government. It is anticipated that this would assist in FIFA overturning their suspension of the AIFF, and the highest court has said that the Under-17 Women’s World Cup will be hosted in India.

During the course of the hearing, the Supreme Court posed the question of who would take charge of the administration in the event that the CoA were to halt operations before the World Cup.

In response to this, Solicitor General Tushar Mehta has said that the Secretary General might take up the responsibility for this matter.

During the hearing, the court said that “it is of the utmost importance that the football tournament comes to India and continues to be played there.”

The order was ultimately announced by the court, at which point it said that the acting secretary general would be responsible for the daily business for the time being.

The Solicitor General was also present at the highest court when the FIFA voiced its concerns over the electoral college.

“Our stance was that players needed to be a part of the executive committee that voted, and at the moment we suggest that 25 percent of the elected executive body would be prominent players,” he said.

Following the announcement of the ruling, the highest court said that the date of the election will be moved back one week from its original, predetermined date of August 28. According to the ruling of the court, the voter list for the election must include representatives from each member organisation (35+1 total).

During the hearing, senior advocate Gopal Shankarnarayan, who was appearing on behalf of the CoA, told the court that FIFA “never intervened in the past two years when Constitution was not being followed in the AIFF.” This statement was made in reference to the fact that FIFA had been involved in the case. According to the Asian News International (ANI), he was cited as adding that “everyone agreed to the modifications here,” but regrettably, some went running behind our backs to FIFA alleging that it is being carried out without recognition.