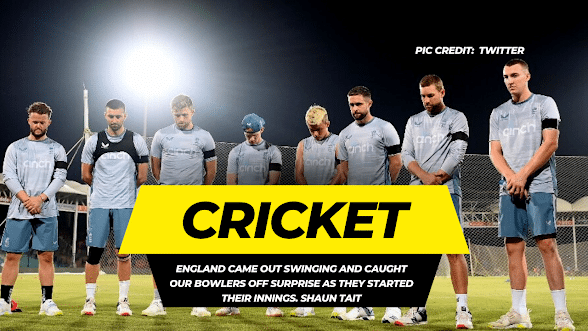 England came out swinging and caught our bowlers off surprise as they started their innings. Shaun Tait

Srinagar: According to Shauk Tait, a former pacer for Australia who is now the bowling coach for Pakistan, England came out with all guns blazing, which caught their bowlers by surprise.

The series is now tied after the sixth Twenty20 International, which England won by eight wickets against Pakistan. In the 14th over, England was chasing a goal of 170 runs, and Phil Salt was destroying the Pakistani bowlers.

Our bowlers were caught off guard when they came out with all guns blazing. In the post-match news conference, Tait said, “I don’t believe we did a much wrong; it was simply fantastic batting, and you got to give respect to England hitters.”

Phil Salt destroyed Pakistan’s bowling assault by scoring an unbroken career-high 88 off of 41 balls. His score was a lifetime best.

“They simply completely shut us down tonight by hitting boundaries right from the first ball.” There are instances when it is successful and other times when it is not. “The ball was coming on to the bat better,” the former Australian quick noted, adding that it was a good moment to bat on second because of this.

On Sunday, the last match of the series will be played in Lahore.