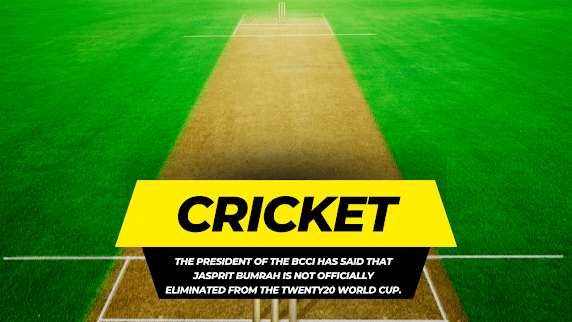 The President of the BCCI has said that Jasprit Bumrah is not officially eliminated from the Twenty20 World Cup.

Sourav Ganguly, the current president of the BCCI and a former captain of the Indian cricket team, has dismissed rumours that India’s premier bowler Jasprit Bumrah would not participate in the Twenty20 World Cup in Australia in 2022.

As a result of Bumrah’s exclusion from the upcoming Twenty20 International series against South Africa, his participation in the ICC Men’s Twenty20 World Cup 2022 is now very much in question.

However, BCCI president Sourav Ganguly is not given up hope that Bumrah would go to Australia and compete in the T20 World Cup there. Ganguly made this statement in a press conference.

In an interview with the digital station Xtra Time in Kolkata, Ganguly said that Bumara is not eliminated from the World Cup competition just yet.

A media statement issued by the BCCI earlier on Friday announced that India’s ace fast had suffered a back injury and was being checked by their medical staff at the NCA. The injury was sustained earlier on Friday.

However, Ganguly said that he was keeping his fingers crossed and that a final decision might be made in the “next two or three days.” Bumrah was required to have scans performed on his back.

As was the case with Ganguly, the supporters of India’s national cricket team are keeping their fingers crossed that Bumrah would be given the all-clear to compete in Australia. This would significantly improve India’s chances of taking home the trophy.