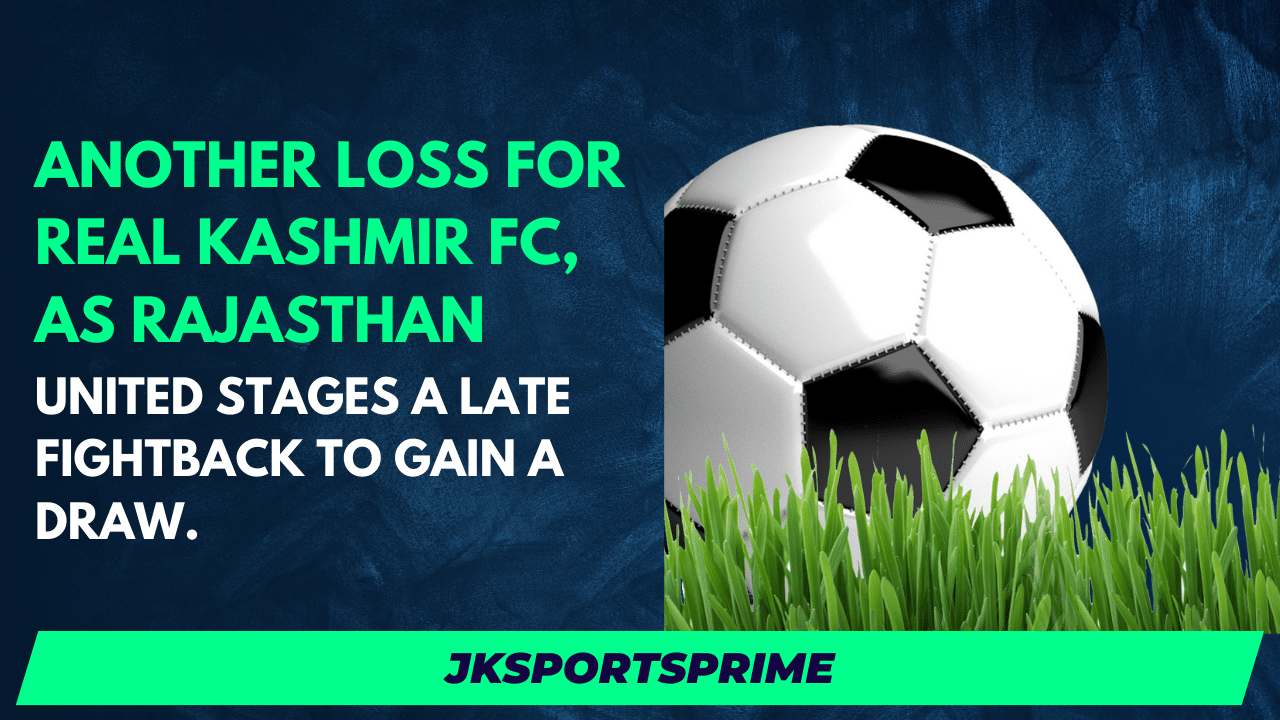 Another loss for Real Kashmir FC, as Rajasthan United stages a late fightback to gain a draw.

Pedro Manzi netted the equaliser in the dying embers as Rajasthan United held Real Kashmir for a disappointing draw in the Hero I-League on Sunday afternoon at the Kalyani Stadium in Kalyani. The match took place on April 10. Mason Lee Robertson scored twice in the first half to establish his team in the lead, but they wasted it once again as Rajasthan scored twice in the second half to pull off the comeback and save a draw from the jaws of defeat. Pedro Manzi and Alocious scored for Rajasthan.

Real Kashmir came out strong in the first minute of the second Hero I-League match of the day, applying pressure to the team that they were playing against right away. They were also rewarded for the same thing, as the side from Kashmir received their very first opportunity in the shape of a free kick in the fourth minute of the match. As Mason Robertson moved up to take the free kick, everyone’s attention was focused on him to make a good kick. The Scottish striker did not let everyone down, as he put Real Kashmir ahead in the very first minute of the match by converting a set-piece opportunity.

Minutes later, Sardor Jakhonov of Rajasthan United had an opportunity to equalise for his team, but a fantastic stop by Bilal Khan prevented him from scoring the goal that his team well deserved.

After giving up an early goal, Rajasthan’s play in the centre of the field seemed to be frenetic as they sought to bring the score back to even. After receiving a wonderful cross into the box, Pedro Manzi tried another chance, but his bicycle kick went right into the palms of the goalie.

Omar Ramos made an effort to open up a scoring chance for his side in the 16th minute, but his header was blocked before it could cross the goal line. As the half-hour mark came, the Snow Leopards were in a defensive position, which allowed Rajasthan United more time on the ball, and the visitors seemed to be at ease.

In the 43rd minute of the match, Real Kashmir increased the ante by scoring their second goal of the game. This goal occurred as the first half was coming to a conclusion. Ragav Gupta’s outstanding cross from the right side of the field enabled Robertson to score once again after the forward was given the opportunity.

They continued their great start from the first half into the second half, when they looked to expand their advantage. In the 49th minute of the match, Bernard took a wildly inaccurate shot from the middle of the field, but the goalkeeper was able to save it. After waiting for four minutes, he took another shot, but this time it sailed wide of the target.

During the 55th minute of the match, Rajasthan United made two substitutions. Alocious M and Anil Chawan came in for Sardor Jakhonov and Harmanjot Singh, respectively.

In the 60th minute, Rajasthan had a good opportunity to cut into the deficit, but Koushik Sarkar made a superb defensive play to prevent them from scoring. In the latter part of the game, they were dominant in terms of ball possession, but they lacked inventiveness.

Super-sub Alocious scored the equaliser for his team in the 75th minute by heading the ball into the back of the goal after receiving a well placed cross from Ramos on the right side of the field.

As the game drew closer to its conclusion, Rajasthan did not give up on their pursuit of an equaliser, while Real Kashmir tried to steer clear of any late-game tension. Eventually, Rajasthan was rewarded for their unceasing efforts when Pedro Manzi scored an equalising goal with an overhead kick in the 90th minute of the game.