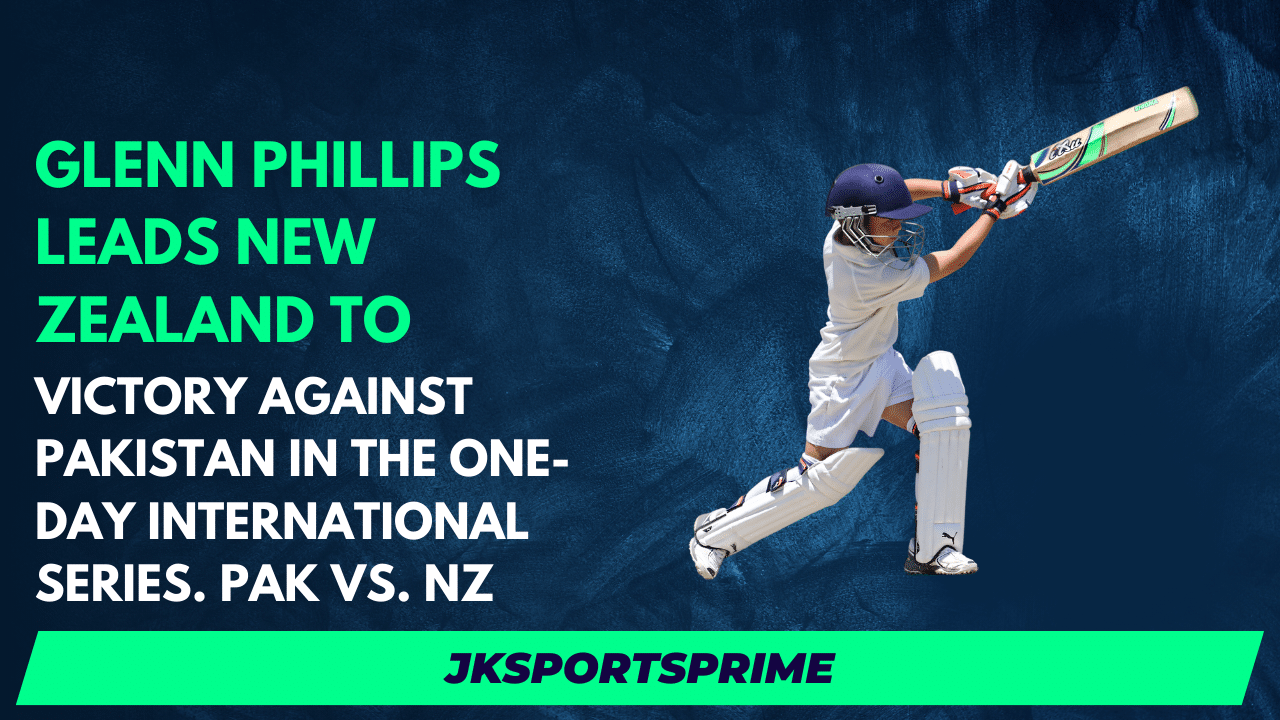 On Friday, January 14, in Karachi, New Zealand beat Pakistan in the third and final one-day international match of the series by virtue of Glenn Phillips’ storming innings. Pakistan was defeated in the series.

New Zealand started out the series on the wrong foot, losing the first game of the series, but bounced back to win the next two games to win the series 2-1.

It indicates that Pakistan would have to wait for their 500th One-Day International triumph.

The runners-up of the 2019 World Cup slipped from 160 for two to 205 for six before recovering to achieve the 281-run target with two wickets and 11 balls to spare. Phillips clubbed four sixes and four fours in a 42-ball score of 63 not out, and he and Mitchell Santner (15) added 64 runs in 44 balls for the seventh wicket. Despite this, Phillips did not get out.

Because of their win by two wickets, New Zealand will maintain their position as leaders of the ICC Men’s Cricket World Cup Super League with 150 points regardless of the outcome of the third one-day international between India and Sri Lanka on Sunday. India will continue to hold the second spot, while Pakistan will take the third spot with 130 points.

In a similar vein, New Zealand have improved their status as the top team in the ICC One-Day International Team Rankings, while Pakistan have retained their pre-series standing of fifth place in the rankings. Ironically, Pakistan had a chance to dominate the ICC ODI Rankings and the ICC Men’s Cricket World Cup Super League after winning the first one-day international match (ODI), but the team went on to lose the subsequent matches, which threw off all of their expectations and calculations.

Before starting this series, Pakistan and New Zealand had competed against one another in five One-Day International (ODI) series that each included of three or more matches and were played in Pakistan. Pakistan had emerged victorious in all five of those series. New Zealand was victorious in both of the bilateral series that were played in the UAE in 2009 and 2014, while the 2018 series finished in a tie with both teams scoring one point each.

Phillips was dropped on 51 by Mohammad Rizwan off Mohammad Nawaz, but by that time he had virtually finished off Pakistan’s ambitions of becoming the third team behind Australia (592) and India (534) to complete 500 victories in one-day internationals. The next chance for Pakistan to do this will come in April, when New Zealand will visit for ten one-day internationals and ten Twenty20 Internationals.

In the process of New Zealand’s attempt to reach the goal of 281 runs, Finn Allen (25) and Devon Conway got the team off to a good start by scoring 43 runs off of 53 balls. After that, Conway (52) and Kane Williamson put up 65 runs for the second wicket off of 73 balls. Williamson (53) and Daryl Mitchell (31) put together a partnership for the third wicket that scored 52 runs in 61 balls. However, shortly after that, New Zealand suffered a middle-order collapse and lost four wickets for 45 runs. Phillips was able to first rescue the situation and then steer the team to victory.

Earlier, Pakistan opener Fakhar Zaman stroked his maiden ODI century at home and ninth overall in 65 matches, as Pakistan recovered from 21 for two to 280 for nine in 50 overs thanks to Zaman’s performance.

Fakhar contributed 154 runs for the third wicket while partnering with Mohammad Rizwan, scoring those runs off of 161 balls. After hitting six fours and scoring 77 runs off of 74 balls, Rizwan was finally bowled by Ish Sodhi, which brought an end to the stand.

Salman Ali Agha, who batted lower in the order, made 45 runs off of 43 balls, including four fours and a six. Later on, he was successful in taking two wickets while allowing just 42 runs, but his team still lost.

To summarise the results:

Devon Conway was named Player of the Series (New Zealand)

The end result was that New Zealand triumphed by a score of two wickets to take the series 2-1.