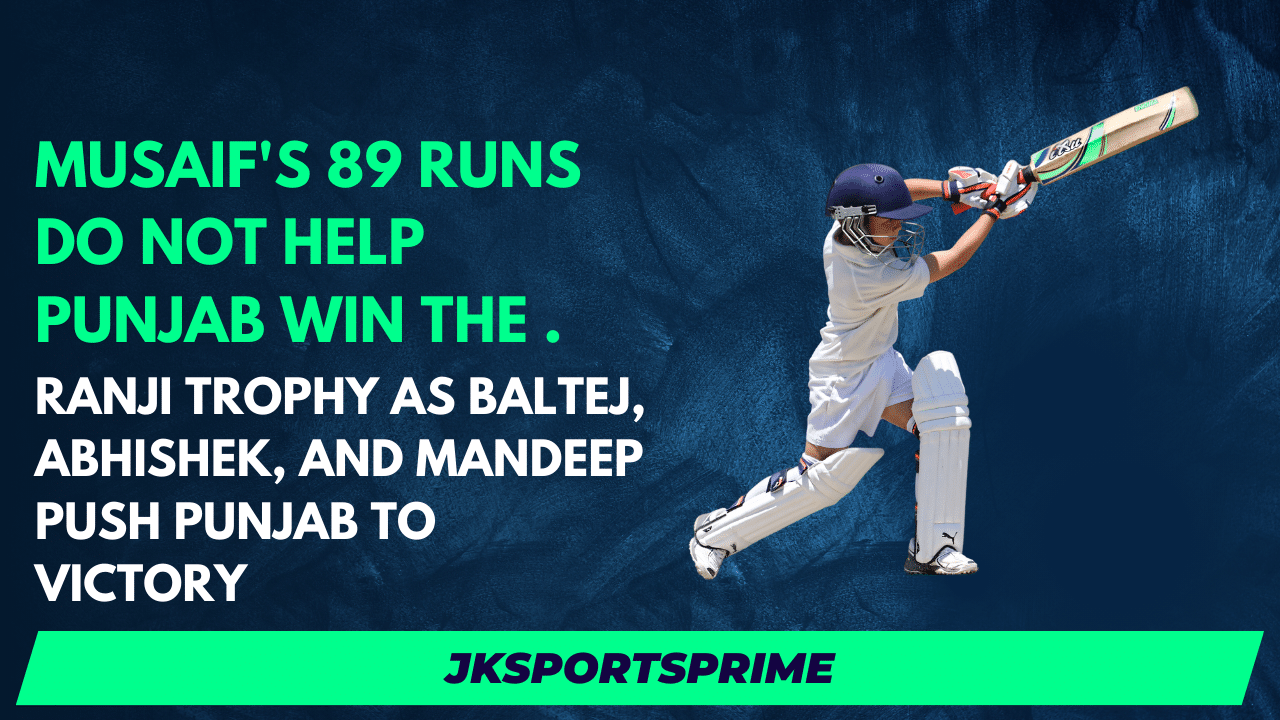 Musaif’s 89 runs do not help Punjab win the Ranji Trophy as Baltej, Abhishek, and Mandeep push Punjab to victory.

Srinagar, Jan 13: Musaif Ajaz’s magnificent 89 runs were in vain as medium pacer Baltej Singh produced a superb bowling show before the duo of talented opening batsman Abhishek Sharma and skipper Mandeep Singh shone with the willow to power Punjab to a 4-wicket win over Jammu and Kashmir in the Ranji Trophy Elite Group-D match played at IS Bindra Cricket Stadium, PCA, Mohali today. The match was played at the IS Bindra Cricket Stadium
Punjab needed 205 runs to win in 38 overs, but they got the necessary runs in just 24.5 overs with the help of a power-packed innings of 83 runs by Abhishek Sharma. As a result, they won the match by 4 wickets despite losing 6 wickets throughout their innings. Abhishek got 83 runs in only 47 balls, studded with 9 fours and 4 sixes, while Mandeep Singh, who was captaining the team, stayed undefeated on important 45 runs after scoring off 39 balls with three fours and one six. Abhishek collected his runs in just 47 balls. Other efforts were Prabhsimran Singh (31 runs), Anmol Malhotra (17 runs), and Mayank Marka de 5-ball unbeaten 14, respectively. In particular, Abhishek was instrumental in his team’s victory by setting the bowlers on a leather hunt right from the beginning of the match.

Taizeem Younis Tak collected one wicket for J&K whereas Abid Mushtaq took four wickets for his team despite allowing 56 runs to be scored during his eight overs.
Earlier, J&K began their second innings with a score of 18/1 and ended it having scored 260 runs in 63.4 overs, which set a goal of 205 runs for Punjab to reach in their innings. This was made possible by a magnificent knock by Musaif Ajaz. Musaif scored 89 runs off 122 balls, including 10 fours and 2 sixes, while Fazil Rashid added 46 runs to the total. Musaif displayed grace, brilliance, steadiness, and sublimity in his performance, while Fazil Rashid contributed 46 runs. Other contributions were Vivrant Sharma (26), Shivansh Sharma (23), and Auqib Nabi (21).
The match was set up for Punjab to win thanks to the efforts of Baltej Singh, who collected another five-wicket haul and established the tone for their eventual success. Mayank Markande collected four wickets despite allowing 61 runs in his 15.4 overs, while Baltej claimed five wickets while only allowing 45 runs over the course of his 19 overs. Sidharth Kaul was also responsible for taking one wicket.
The outright win was worth six points to Punjab, while J&K was left without a single point for their efforts.