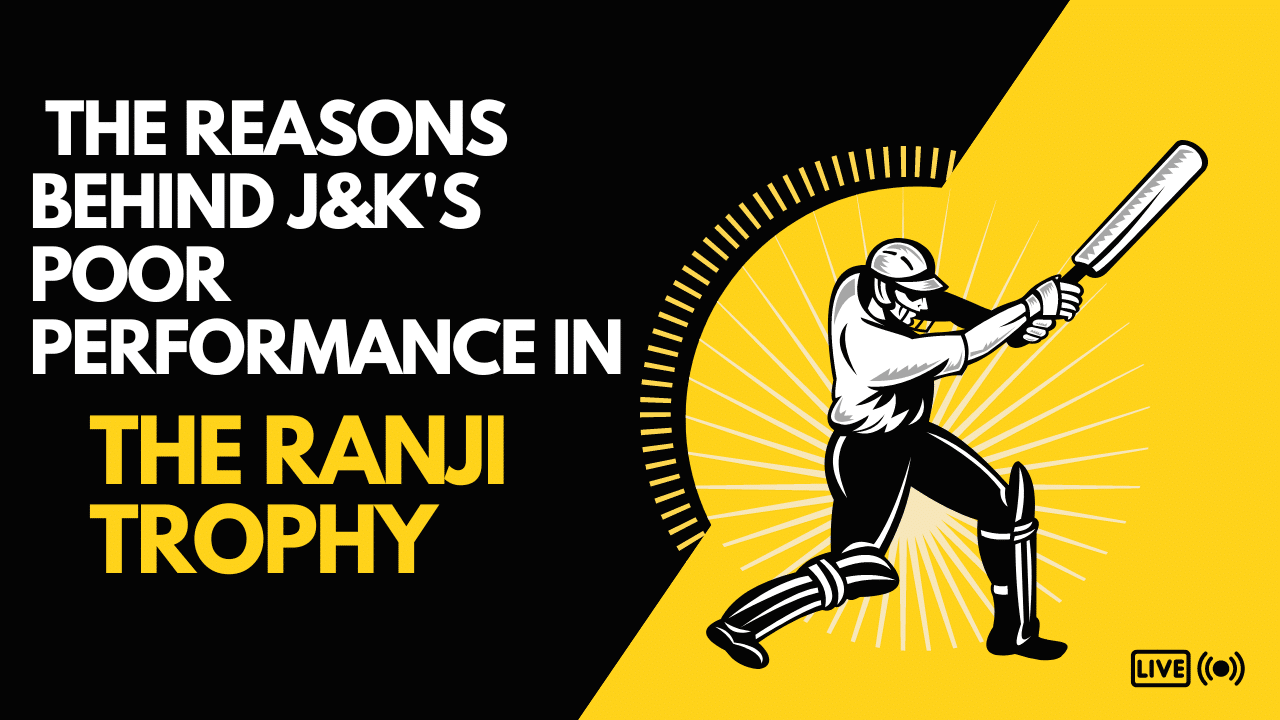 What are the reasons behind J&K’s poor performance in the Ranji Trophy, and what could be done to improve it?
A Motera pitch that is known as a spinner’s heaven, coated in red dirt and featuring visible areas before a ball is bowled on it! The J&K captain, Shubham Pundir, comes out to throw the coin. He gives off the impression that he is unaffected by the fact that the team lost the first match against Madhya Pradesh by an innings and 17 runs, and that it happened at home!

Priyank Panchal, the captain of Gujarat, won the toss and decided his team would bat first. Why?

In an earlier version of the pitch assessment, Rajat Bhatia made the observation that “the pitch would break up shortly and there will be turn and bounce from the fag end of day one alone.” Since Gujarat was playing in their own stadium, they were well familiar with the wicket.

However, even J&K had stayed for a few days at the location in question!

Anyone with even rudimentary understanding of cricket could easily see that this pitch is about to start degrading very quickly. Therefore, it was a good thing that I won the coin toss and elected to bat first. Since the only opportunity to score several runs was on the first day while the pitch was still new, this was the only day available.

In addition, any team would play three spinners on this track if they knew it would assist them since they know it would help them. Gujarat behaved in the same manner. But what about the state of J&K? They used three fast bowlers and two spin bowlers, and one of their players was an all-rounder who batted as well.

It is common knowledge that the majority of the pitches in India are favourable for spin bowlers, but J&K seems to have other things in mind! Out of the 16 players on the team, Abid Mushtaq is the only one who can be classified as a true spinner. The other one is Sahil Lotra, who is more well-known for his hitting but doesn’t appear like much more than a part-time spinner.

Also, although Gujarat would have been hoping to win the toss,

J&K had already decided that they would bowl first on a surface where it is likely that every other team will bat first for obvious reasons. This is because J&K believed that their bowling would be more effective. Isn’t it bizarre? J&K were unsuccessful in winning the coin toss, although they did achieve their goal of bowling first.

Pundir made the statement before the toss that J&K believed in playing “fearless” cricket, and that if they had won the toss, they would have bowled first! But should any team be willing to ignore logic in order to seem fearless? However, I’ll leave it up to the readers to determine.

So, if J&K accomplished what they set out to do, what would you anticipate happening next? Clearly, Jammu and Kashmir is firing in with the ball and gaining wickets early on in the match. What really transpired was that Gujarat’s openers built up a stand of more over 100 runs, and they got off to a fantastic start.

However, the bowlers staged a kind of comeback and limited the home team’s score to 267/6 at the conclusion of the first day of the match. In the end, on the morning of the second day of the match, Gujarat made a total of 307 runs in their first innings.

Bowlers did a decent job overall!

However, this was only feasible because the left-arm spinner, Abid Mushtaq, had to toss 37 overs. This was more than one-third of the total number of overs that J&K bowled (104.3). He ended up taking four wickets throughout the match.

Even though he bowled a total of 21 overs and took two wickets, Sahil Lotra, the second spinner, didn’t appear very impressive. In addition, seam bowler and all-rounder Auqib Nabi took two wickets for his team.

At this point, it was J&K’s turn to step up to the plate. Again, one would think that they would at least respond in a forceful manner! J&K was bowled out for a meagre 135 runs as a result of the players continuing their careless batting performance from the first match.

Fazil Rashid, who was also the wicketkeeper, was the batter who scored the most of the runs. He came back into the game with an undefeated score of 51, and he and Umran Malik created a partnership for the final wicket that was worth 52 runs. If things had gone differently, J&K wouldn’t have been able to pass the 100-run milestone.
It’s hardly surprising that Gujarat followed through on the follow-up, and there was no stopping them! Similar to what happened in the first innings, J&K continued to lose wickets at regular intervals throughout the second. In spite of the fact that there were a few successful partnerships, J&K could only score 182 runs during their second innings, leaving Gujarat with a goal of 11 runs to reach. The home team then attempted to reach their target but suffered one loss of wicket in doing so.

As a result, it meant that J&K would suffer two straight embarrassing losses!

It has only been a few weeks, but this is the same Jammu and Kashmir side that created history by advancing to the quarterfinals of the Vijay Hazare Trophy for the first time ever. So, what exactly is the problem?

The first thing that has to be done is for JKCA to have a grasp of the phrase “horses for courses”! They use the same same team configuration for each and every scenario! The same side has competed in the Twenty20 competition for the Syed Mushtaq Ali Trophy, the 50-over competition for the Vijay Hazare Trophy, and will now compete in the Ranji Trophy over several days.

These are very distinct forms, and it should go without saying that different players have strengths and weaknesses in various game types. That is something that JKCA does not seem to grasp! In first-class cricket, not a single hitter on J&K’s current team has a batting average that is higher than 32. Even in Twenty20 cricket, a score of 32 is regarded to be below average for a top-order hitter; how much worse is it in five-day cricket?

What else could possibly describe J&K’s batting performance if not this?

The J&K hitters also lack the proper mentality when they go up to the plate. They either play too defensively or too aggressively, but maintaining the proper balance between the two is essential to winning a multi-day match of cricket. During this particular game versus Gujarat, J&K played an excessive number of maidens in the first innings, which caused the bowlers to focus more heavily on them.

They attempted to be excessively aggressive in the second inning, but it ended up being counterproductive once again! Therefore, the challenge is to locate that happy medium! I’m not a coach, but anybody who pays close attention to cricket would be aware of this fact. In addition, this conclusion is not based just on the results of this match; in the first match, J&K was bowled out for 98 and 193 runs as well.

Additionally, J&K learned from Gujarat how to make the most of their surroundings at home. In the first match, which took place in Jammu, J&K had prepared the ground in such a way that the ball would, for the most part, not bounce higher than the knee. They were aware of their capabilities and might have devised a strategy that would have favoured them rather than the other team.

So, what steps may be taken to improve J&K’s performance in the Ranji Trophy?

First things first: “where is Parvez Rasool?” is the question that even people are asking. The individual who has led J&K to the most victories in Ranji Trophy competition on practically every occasion is not included in the team! It is a fact, despite the fact that it may seem to be quite strange.

The answer is no; he is not pulling out due to personal issues! He did not get a call from JKCA inviting him to the programme either. That cannot possibly be the case! He has just been left out. During the previous Ranji Trophy season, the all-rounder collected 16 wickets over three matches. He holds the record for most wickets taken for J&K in almost all three versions of the game. Additionally, his batting average is above average.

The question then is, why is he not on the team? However, only JKCA is aware of it, and they are not prepared to address your question.

The addition of him to the squad is probably going to be one of the answers to our problems. The J&K crew will benefit enormously from his knowledge behind the bat as well as behind the bowling machine.

The legendary batsman Abdul Samad, who provided J&K with the bulk of their illumination in the middle order, is also being sorely missed. Since he is now out with an injury, it would be very beneficial for the team if he could return to action as soon as possible. In a similar vein, the starting batter Qamran Iqbal, who is also ailing, can come in helpful after he heals, provided that he does so.

Aside from these specific people, the way that J&K tackles red-ball cricket is in desperate need of a significant makeover. In the first two matches, they’ve given a terrible performance of cricket and made some odd decisions! The very first thing that they need to ask themselves is whether or not they are just here to compete or to win. Things are going to be different once they get an answer to that question.